Argentina is the best place for digging a hole to China

But dig anywhere in the continental United States and you will come out in the middle of the Indian Ocean. Also, you will probably drown before the ocean drains into the hole.

Posted in China, science and pseudoscience

Gaming news that affects you

Expect cheers among hardcore online game enthusiasts when they learn Merriam-Webster’s Word of the Year. Or, more accurately, expect them to “w00t.”

“W00t,” a hybrid of letters and numbers used by gamers as an exclamation of happiness, topped all other terms in the Springfield dictionary publisher’s online poll for the word that best sums up 2007.

I suppose this means that the most notable event of 2007 is that a lot of guilds won a lot of gold killing orcs.

Greenpeace has called on gamers to persuade Sony, Microsoft and Nintendo to make their consoles greener.

According to the environmental campaign group, game console makers have so far “failed to reduce the toxic burden of their products”.

As part of its campaign, Greenpeace has launched a 90-second video featuring some of the iconic games console characters – Microsoft’s Master Chief, Nintendo’s Mario and Sony’s Kratos – competing for the prize of a greener games console.

Now Kratos — there’s a fellow who really cares about the environment. 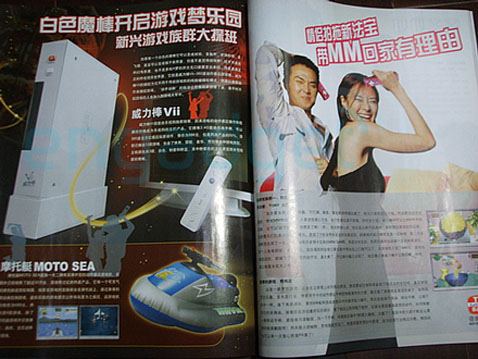 Will Sony, Microsoft, and Nintendo be forced to make room for this new intrepid competitor?

Two headlines that go together

China’s booming recycling industry is helping to slow the destruction of forests worldwide, providing a strong market for wastepaper that mostly comes from the United States and Europe according to a study released Friday.

Chopped cardboard, softened with an industrial chemical and flavored with fatty pork and powdered seasoning, is a main ingredient in batches of steamed buns sold in one Beijing neighborhood, state television said.

If four years of following the unchanging situation in Darfur are not enough to make one pessimistic, Bronwen Maddox’ assessment at Times Online ought to do it.

The reasons for the inertia on the part of those who talk the talk are outlined succinctly. Heads of state of the G8 have unanimously ruled out a military solution — our first mistake. Any multilateral solution would be contingent on the cooperation of parties who have it in their interest to oppose intervention, such as the Chinese who profit from sales of arms to Sudan. And for everyone else, the Bugblatter Approach™ is working all too well, is it not?

I’m on the Save Darfur Coalition mailing list, which regularly alerts members of letters and petitions they can send to local leaders. One of the most recent alerts was a pre-written email addressed to Secretary Rice urging diplomacy between the US, France, and China to end the crisis. When I read this one part I laughed out loud:

It is clear that influential nations such as the U.S., France, and China could accomplish more working together than they have thus far by working separately. It is also clear that it is in each country’s best interest to help end the conflict, build a lasting peace, and help bring stability to Sudan.

In the interest of China? Haha! Very funny, Dr. Jones.

Of course I submitted the letter anyway, as I submit all letters and petitions Save Darfur points me to, in the vain hope that it will do something to make a difference. But at this rate we can expect history to chronicle the event in more or less the same fashion as it did Rwanda.

To our credit we have not yet abandoned Iraq nor Afghanistan, where humanitarian concerns are coupled with national interests (I dare anybody to tell me they aren’t). But the forces at work home and abroad beating a drum of surrender are strong. Where national interests are absent or unacknowledged, the picture from Somalia 93, in which the deaths of a dozen American soldiers was all it took to make us turn tail and run, is a closer match to reality. I’m not in a position to predict what manpower and resources would be required to put an end to the crisis in Darfur, but it must be safe to assume that the number of American dead when all is done would be considerably fewer than the number of African dead stacked up pretty darn high already (in the hundreds of thousands by credible estimates) and climbing with each day.

How much more is the life of an American worth than the life of an African? A lot more, I guess. After the Holocaust our motto was supposed to be “Never again.” Shouldn’t we change it to “Live and let die” or something?

The people versus the censors

While misguided fools blather about alleged absence of freedom of speech in the US there is a real human rights struggle ongoing in the most populous nation in the world. The Internet was used to break the story of a massive child slavery scandal in a Chinese province this month. Information wants to be free, but it has to get past a determined government. With president Hu Jintao calling earlier this year for the Internet to be “purified”, it’s hard to predict how the battle will turn out.

There is some reason to hope that companies may begin to see it in their interest to be subversive rather than complicit in the censorship. Consider Flickr’s efforts to troubleshoot blocked images. Since a business listens only to profit, there is a role for the consumer to play in this fight–support the subversive companies, not the complicit ones. (well, I would like it to be that simple anyway)

Cops who use kung fu

The reporter says this Taiwanese police unit is probably the toughest in the world. Yeah, it probably is. For close range fighting is there anything more effective than Chinese kung fu?

A geographical guide to sin, originally printed in Times Online.

Here’s my own picks:

H/T to Chameleons on Bicycles

Here’s a story about a Chinese couple filing a lawsuit in a US District Court against Yahoo for the company having provided information that Chinese authorities used to sentence the man to prison (for his writings online). I don’t see what can come from this other than a symbolic gesture. If imprisoning and torturing people for expression of ideas is the law in China, and if United States trade law honors Chinese law as I believe it does (somebody with more legal expertise than myself correct me if I am wrong here), then what case do they have?

Obviously the West lacks any will whatsoever to carry out Sharansky’s idea, as one can plainly see from looking at relations with China, or Saudi Arabia, or hell, Iran. Read this Opinion Journal piece on EU dealings with Iran and ask yourself what incentive the Ayatollahs have to ever change their ways.

Recommended reading for those even moderately interested in international relations in Asia is this piece by GI Korea on the moral bankruptcy of those who point the finger of shame at the Japanese for deplorable behavior they long ceased to practice, while uttering not a peep about the deplorable behavior that goes on in their own backyards right at this very moment. The sexual slavery of North Korean refugees in China, for instance.